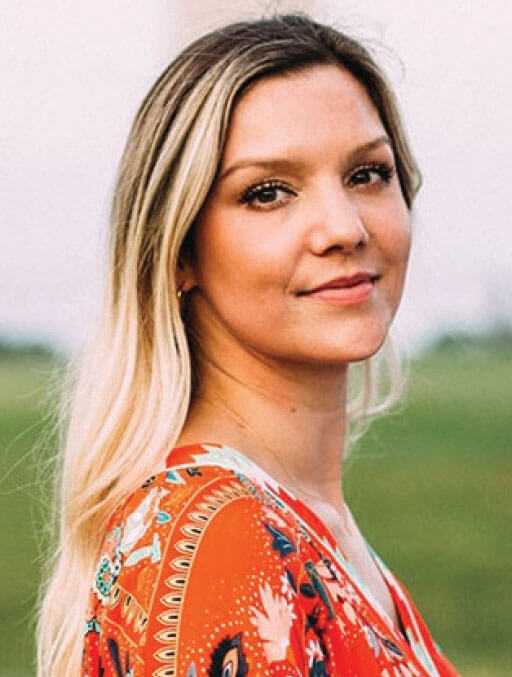 Some people are simply “poised” for a career in medical aesthetics. It’s safe to say Kelly Branch is one of those people. Her insatiable appetite for learning everything she can about the beautiful art of injecting as well as all the intricate facets of best skincare practices has fueled a passion that shines through with every patient interaction at Moksha Aesthetics.

Kelly’s love for injectables is revealed through her experienced work with Botox® and Xeomin® injections as well as a host of dermal fillers.

A native of Long Island, Kelly spent much of her youth as a self-proclaimed beach bunny during the summer months and a snow bunny in the winter. When she wasn’t having fun in the sun or tearing up the slopes, Kelly was heavily involved in her studies, which evidenced a somewhat medical direction early on.

“I was always a science nerd,” she said. “It came very easy to me and I was comfortable with it. I wasn’t fazed by blood, broken bones, or anything like that. So it was kind of a natural progression for me. I always just had knack for interacting with people, too.”

Kelly obtained her undergrad degree at SUNY (State University of New York) Albany, followed by a degree from the College of Mount Saint Vincent in the Bronx.

Kelly’s academic path initially steered toward pre-med, but she felt a career as a physician wasn’t necessarily for her. That didn’t stifle her love for the science aspect of it all, such as the biology and chemistry components, however.

Fast forward to her graduation with a bachelor’s in human biology, Kelly began her career working in a dermatopathology lab, where she obtained her histology license and played a key role in the diagnosis of skin disorders and diseases along with the attending dermatopathologist, Dr. Tsou Hui. Dr. Hui became a mentor for Kelly and helped shed light that a career in nursing would fit her personality to a tee.

While she truly enjoyed the science aspect of her job at the lab, her desire for more human interaction was much too strong to deny.

“When I was working in the lab, I didn’t have a lot of direct interaction with patients and peers, which was a challenge for me,” Kelly said. “I loved the science and valued the learning experience, but I needed human interaction. So that’s when I started to look into different schools for nursing.”

She soon got accepted into an accelerated program and started nursing school a month later. And thanks to her experience at the lab, the overall interest in dermatology was more than apparent. But it wasn’t until she started personally experimenting with different forms of skincare and experiencing her own aesthetics treatments that her career path would take a welcomed turn toward the wonderful world of medical aesthetics.

“I’ve always been kind of a skincare junkie. I absolutely love skincare,” Kelly said. “I’m always looking into it, especially medical-grade skincare. I make sure to always be in the know on the latest trends and trying almost everything on myself.”

And Kelly certainly had reason to try a gamut of skincare products and techniques. She’ll be the first to tell you she had her share of skin issues, such as acne, hyperpigmentation, and melasma.

“My skin was mess,” she admits.

Those skin issues eventually led Kelly to seek the help of Erika Barry (@injectorbunny). A friendship soon developed, and Erika quickly noticed Kelly’s potential. That led to an offer to train Kelly on injectables under the skilled direction of Erika and Hania (@injectorhoney), which Kelly gladly accepted.

“After learning the basics, we really went into facial anatomy and deciphering what the patient wants but also being sure to educate them,” Kelly said. “That built a very strong foundation in safety. Erika and Hania taught me that medical professionals can learn to inject but you have to be able to inject safely. We’re not just injecting filler or toxins. There’s so much more to it than that.”

Kelly soaked up every drop of valuable knowledge she could, delighting in all the facets of facial anatomy, various muscle function, volume loss, and the delicate connection between it all.

Her approach to her patients is simple yet effective. She takes the time to listen to every concern, maps out a tailored plan, and spends ample one-on-one time to educate the patient.

“I hand my patients a mirror and I ask them to point out exactly what’s bothering them,” Kelly said. “Then I immediately go into education mode. If I have a 30-minute appointment, it’s usually 20-25 minutes of education and 5 minutes of injecting. I think it’s important that they know what they’re getting into, the risks, the benefits, the anticipated outcomes, and basically creating a plan that’s feasible for them.”

You won’t find any “overdone” outcomes under Kelly’s watchful eye. She takes a more conservative approach to injecting to ensure the most natural-looking results possible.

“I’m actually pretty conservative,” Kelly said. “Especially if patients are first timers, I go over every area of their face and I explain all that we can do. But I also point out what is not needed. I always say we’re going to start really slow, like maybe just one or two injections. Then for the next appointment, I’ll gauge how they feel. We always strive for a natural result, and I think being conservative is what’s going to give us the best results.”

Every patient has a story, but one in particular about a woman who had major surgery that resulted in some facial asymmetry really stands out in Kelly’s mind and solidifies why she’s in the right line of work.

“Someone had filled her lips with another provider and, unfortunately, it did not turn out well. She then came to me for help,” Kelly said. “I treated her and as she was leaving our office after her procedure, she was crying. When I asked why, she said she finally felt like herself again. That was so rewarding to be able to give her that peace of mind. It was the first time a patient made me cry. And then there are all the other patients who just tell me they have their confidence back. It all just reminds me why I love my job so much.”

No matter how far along Kelly gets in her craft, she still makes it a point to keep the education juices flowing. By never being stagnant in her knowledge of injectables and important at-home skincare regimens, Kelly can keep her patients in the know at all times.

“I’m excited about getting even better at my practice and learning new techniques and being able to bring them into my skillset,” she said. “And I also love combining medical-grade skincare with injectables. Your skin is an investment. If you’re going to spend money on injections, you need to start taking care of your skin at home. If you do, your results are going to be that much better.”

To schedule your appointment with injector Kelly, call us at (240) 907-5009 or visit http://mokshaaesthetics.com/book/.