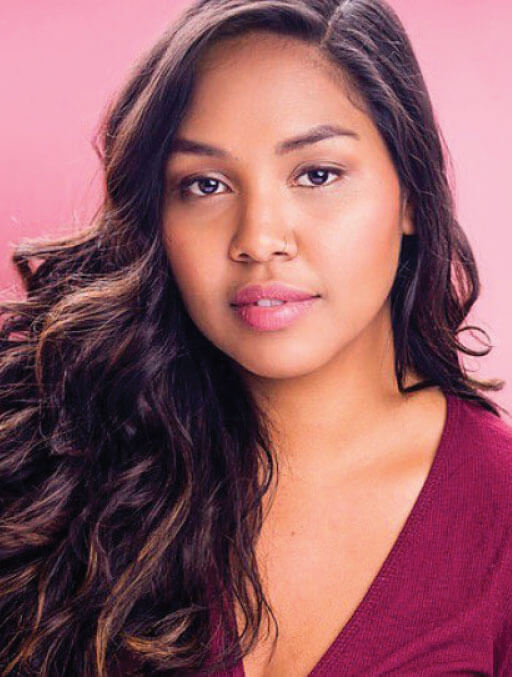 “I actually went to school to be an actor,” she said. “I started acting when I was 8 and then began working professionally through high school, college, and afterwards.”

But things tend to happen for a reason, and Ally’s career as an actor helped to awaken a passion for skincare that eventually led her to get sucked into this wild, wonderful industry just like the rest of us.

“Skincare wasn’t necessarily what I thought I’d be doing,” Ally admitted. “At the time, I was working as an actor and I just got tired of working all these weird jobs. But I’ve always loved skin and makeup. Especially as a performer, I’ve had to do my own maintenance. I just thought it would be great if I actually knew how to take care of my skin and not have to pay someone else to do it. That was my introduction to it all.”

Ally started out living the international lifestyle of a military brat, spending the first decade of her life living in Japan, Malaysia, Alaska, then back to Japan before moving to southern Maryland with her family at the age of 11. She continued down the path of professional acting for the next several years, including earning a Bachelor of Fine Arts in acting at Boston University.

After graduation, Ally found herself working for a concierge medical office in Boston, where she starting to develop an interest for the more aesthetic side of the medical industry.

As luck would have it, there was a medical esthetician next door where patients were referred to on occasion. Ally soon became a sort of protégé to the esthetician, delighting in all the bits of knowledge she was privy to through the increasingly regular interactions.

“I started talking to her about her experience and her business and learning more about what she was doing and creating,” Ally said. “She really encouraged me and told me I’d be great at aesthetics, especially having an acting background where so much of the industry is about talking to people. I thought, ‘This is a day job I might actually like.’”

Once Ally moved to New York and enrolled in aesthetic school, she bid an indefinite farewell to earning a living through acting. Upon completion of aesthetics school, she was quickly hired at a facial boutique as an esthetician, where she found her groove in the field she still delights in to this day.

Of course, having skilled hands for getting the job done is an integral part of any esthetician’s role, but Ally confirms there’s quite a bit more to it than that.

“It’s one thing to have great hands. Yes, it’s important, but those are technical skills that almost anyone can learn,” she said. “But I think what keeps clients coming back is feeling comfortable and trusting that you know what you’re talking about.”

As time went on, the drive to learn even more kept tugging, which eventually led Ally to follow Erika Barry (@injectorbunny) and Hania Khorshidi (@injectorhoney) on Instagram. She soon became a patient herself. And when the aesthetic duo announced they were looking to hire an esthetician for their growing business, Ally jumped at the chance. She certainly brings a lot to the table, thanks to her bubbly personality and her invaluable knowledge of skincare.

“For me, there’s skincare, then there’s the cosmetic side of things,” Ally explained. “Skin is health. I think of it on more of a wellness side of things. It’s about really learning how to take care of yourself as we age. What you need at 20 is not what you need at 40 or 50. I hope to always help people of any age work on their issues and fill in the gaps that maybe some of the cosmetics can’t address. So much of my work is about helping people find those routines. You can come in for injections, but if you’re not consistent in how you’re taking care of your skin at home, then what are you spending your money for? So it’s really about filling those gaps that make the treatments that Erika and Hania are doing as well as what I’m doing that much more effective.”

It’s more than evident that medical-grade skincare is her forte when Ally starts explaining all the nuances among the seemingly endless products on the market.

“I’m an ingredients person and skincare products are where I specialize,” Ally said. “I’m also a consumer. There probably aren’t many products out there that my patients tell me they use that I haven’t tried myself at some point. I think finding a good skincare routine, the products being used, and helping people manage the lifestyle parts of it are what it’s all about. I think of the treatments I do as boosters to help enhance what my patients are already doing.”

Common conditions Ally enjoys helping her patients find relief from are dehydration (which absolutely manifests in the skin), acne, and a multitude of sensitive skin issues.

One patient interaction had a particularly profound effect on Ally.

“My patient was getting married in less than a year, and acne had always been a big issue for her,” she said. “It’s something she was very insecure about. Of course she wanted to look her best for her big day. I started treating her and we noticed some big improvements in about 3 to 4 months. When it was time for the ceremony, she was positively glowing. Even now, she’ll send me some pictures occasionally and the difference in her skin is phenomenal.”

Ally’s biggest point of pride from that interaction is that she didn’t just treat the acne itself and send the bride-to-be on her way, she made sure she was well-equipped to maintain her results on her own long after she was out of Ally’s chair.

“My hope is that you don’t need me to have your best skin but that you come back to me because you want to,” she said. “You’re going to learn how to take care of yourself and manage your own skin. It’s my hope that everyone becomes self-sufficient when it comes to their skin.”

In her role at Moksha Aesthetics, Ally is very excited to fill a need for clients who are seeking a more noninvasive route to their best possible skin.

“The fluffy, nice massage facials, they’re all wonderful and definitely have a valid place in the industry,” she said. “But I like driven results, and I think when you are receiving medical skin treatments, that’s where you yield the most result, so I’m excited to help create some beautiful changes.”