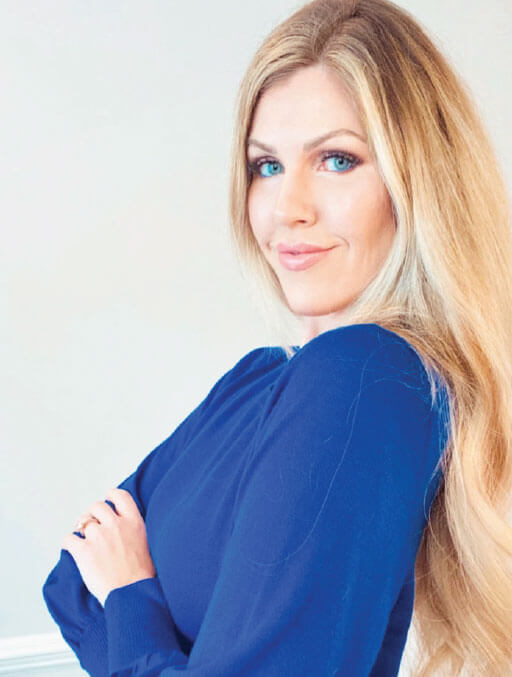 Erika is one of the top aesthetic injectors in the country. She serves as an international trainer for industry leaders such as Merz, Allergan, and Galderma, where she’s also recognized as an expert faculty. In addition to her role as esteemed trainer for all three companies, Erika runs her own private training company, Aesthetic University. Throughout her career, she’s trained top doctors, NPs, and PAs, both within the U.S. and abroad.

Like her business partner and dear friend, Hania (@injectorhoney), Erika was born in London, England. After her family relocated to Texas for a handful of years, they eventually settled down outside of Detroit, Michigan. Although she loved her time in the Midwest, Erika went south to Florida to attend the University of Miami for her undergraduate career. After spending some time navigating the question of what to study, a beloved aunt and nurse practitioner helped Erika decide on trying her hand at a nursing degree.

From there, Erika declared her major in nursing, obtaining her BSN and accepting an offer to attend the prestigious Johns Hopkins School of Nursing in Baltimore, Maryland for her first master’s degree in family medicine. There, she trained under some of the country’s leading plastic surgeons. Following her time in Maryland, Erika moved across the country to attend graduate school at the University of California San Francisco. After graduation, she remained in San Francisco as a surgical nurse practitioner for four years in the plastic surgery department at UCSF. That’s when she discovered injecting.

“I worked for a team of plastic surgeons who told me one day I was going to inject Botox® in this person’s face,” she laughed. “I was very young, like 22 or 23 at the time and didn’t even know what Botox was. But I said, ‘Okay, let’s do this,’ and ended up having a knack for it.”

As a self-proclaimed math and physics nerd, Erika has a deep understanding of the geometric angles of the face, which gives her an immense advantage in her line of work. Coupled with her top-notch people skills, she’s respected by both peers and patients alike for good reason.

“I understand the face on a geometric level, which is where other injectors can sometimes get confused,” she said. “I just break the face up into different planes and sections, then you can use mathematics to your advantage. I’ve also learned by observation that most patients do really well when you take the time to explain how we go about treating from a more structural level.”

But it’s far from simply waving a magic wand (or needle, in her case) to produce the beautiful outcomes each patient dreams of. Erika takes the education part of her job very seriously.

“I’m very good at setting real expectations, and I’m also good at saying ‘no,’ which makes me a good injector,” she said. “I’m good at looking at the face and helping improve the angles, which helps improve the patient’s appearance. But that doesn’t mean it’s for everyone.”

It’s important to note that not all patients are appropriate candidates for injectables, but for many, fillers and neurotoxins are a great way to achieve a fresher, rejuvenated look without surgery.

“As you get older, you lose your elastin and collagen, and your fat pads in your face get smaller and slide down,” she explained. “We can achieve the more youthful appearance with dermal fillers and neurotoxin injections quite effectively.”

Almost anyone can go through the necessary training and foray into the industry of medical aesthetics, but Erika will tell you there’s a bit more to it than just the academic/training components.

“At the end of the day, some people have the knack for it and some don’t. They quickly realize it’s not just about shoving filler into someone’s face. It’s about knowing where to go and how to strategically produce the best possible results for each individual person.”

And for Erika, having that one-on-one connection and continuous communication with her patients helps set the stage for the best possible outcomes that keep her patients happy.

“Explaining everything, that’s the most important thing,” Erika said. “We have to spend a lot of time with them. None of my patients will ever be in the dark on what’s going on if I have anything to say about it.”